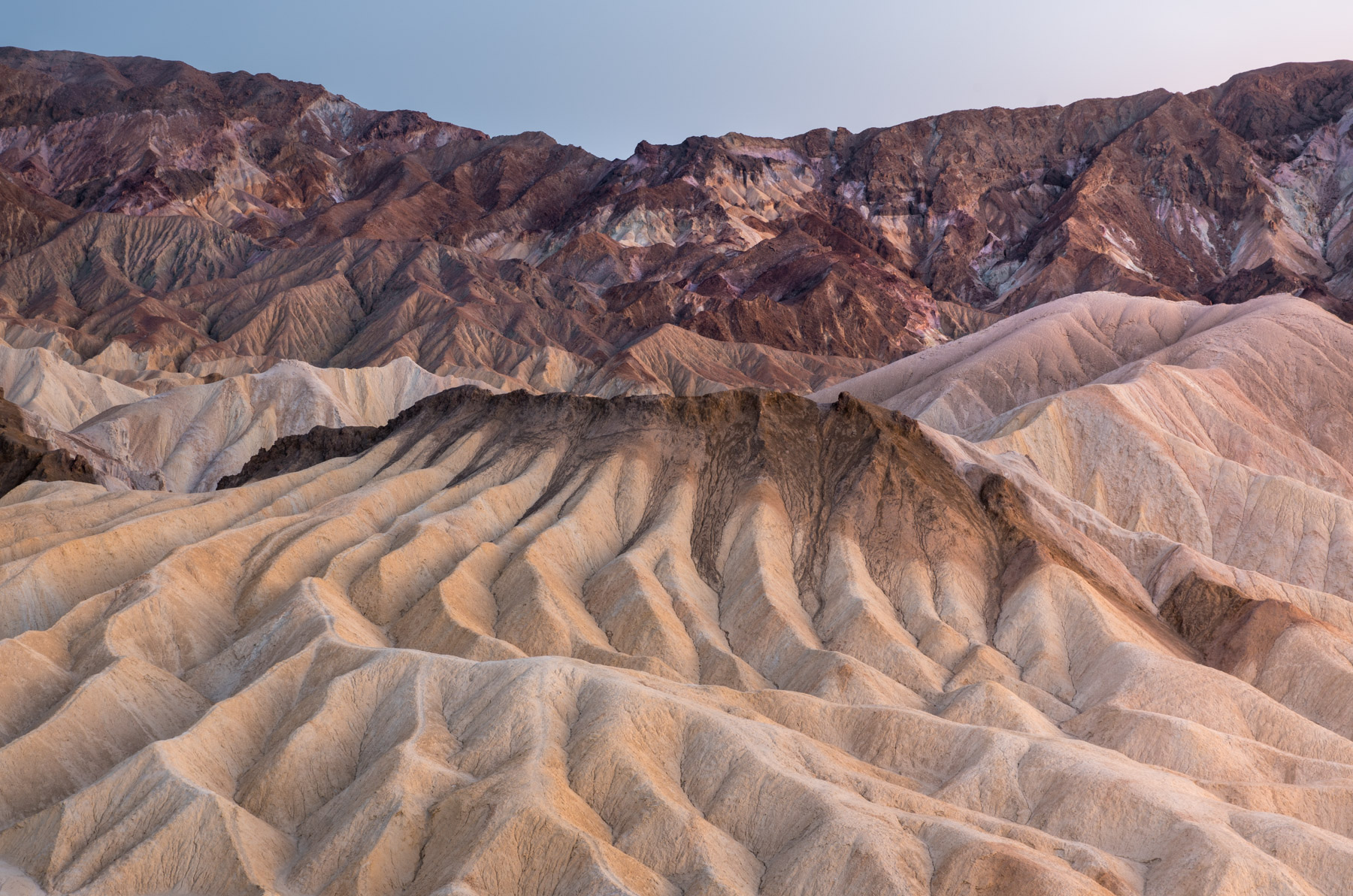 Death Valley in the summer is generally a terrible, terrible idea.. It reaches dangerously hot temperatures every day, so I was quite anxious about this part of my trip. There were a few spots I really wanted to photograph in America’s newest National Park. I only planned on spending 36 hours there to limit what could go wrong. Driving into the park in the evening to prevent the engine overheating, I missed my sunset opportunity at the Mesquite Flat Sand Dunes, which I was pretty disappointed about, but more so relieved just to make it to my campsite with nothing going wrong.

After staying at Furnace Creek, I travelled the short distance to Badwater Basin for sunrise. I couldn’t believe the heat even before the sun had risen, stepping out the RV into 45°C heat. I walked about a km out into the flats but struggled to really find much to photograph. 2017 had seen a lot of rain, and much of the salt crusts had been washed flat. There had obviously been a lot of tourists trampling over the remains of them throughout the spring too.

After a water stop, I made the short drive up to Artist’s Palette, somewhere where I’ve wanted to photograph since planning for the trip. This rocky cliff base reveals an array of oxidised metals giving off a wild set of colours, hence the name. Unfortunately, the sun was higher than I’d anticipated – it really does come up so fast in the summer, and I was shooting in to direct light. This would have been a much better shot either in shade or at sunset, but I managed to still salvage a panoramic with some careful lens shading.

After spending the day in my air-conditioned hotel room (there really isn’t much point in doing anything else in Death Valley in the summer), watching the temperature hit 52°C I ventured out for a few minutes to try and park the RV in some shade. Upon opening the door, all I could sense was the smell of melting plastic… After an initial panic, checking everything plastic that I could set my eyes on, I concluded it was just the driver cab flooring which had softened up and on the brink of melting. Vehicles just aren’t designed for that kind of heat!

Come sunset, I made the short drive up to Zabriskie Point, an awesome panoramic spot with amazing vistas looking over rocky hills with various shapes, colours and shadows. You could photograph this spot for a few days alone, there’s a photo to be had 270° around the vista point. I stayed here well into the night, treated by some of the darkest skies I’ve ever seen. The Milky Way shimmered and was coated with countless stars, what a treat! After having my camera overheat several times, and making trips back to the RV to give it 5 minutes in the fridge, I managed to capture some great night sky.

Driving out of Death Valley unscathed after an interesting couple of days was a huge relief. I would advise anyone who intends to visit there in the summer to take extra care and plan their trip carefully, limiting the amount of time they spend there and keeping activity to a minimum during the day. This kind of heat can very easily kill, all it takes is a break down on the side of the road, or a hike taking that bit longer than expected.

Read the safety information on the NPS website to help you plan.