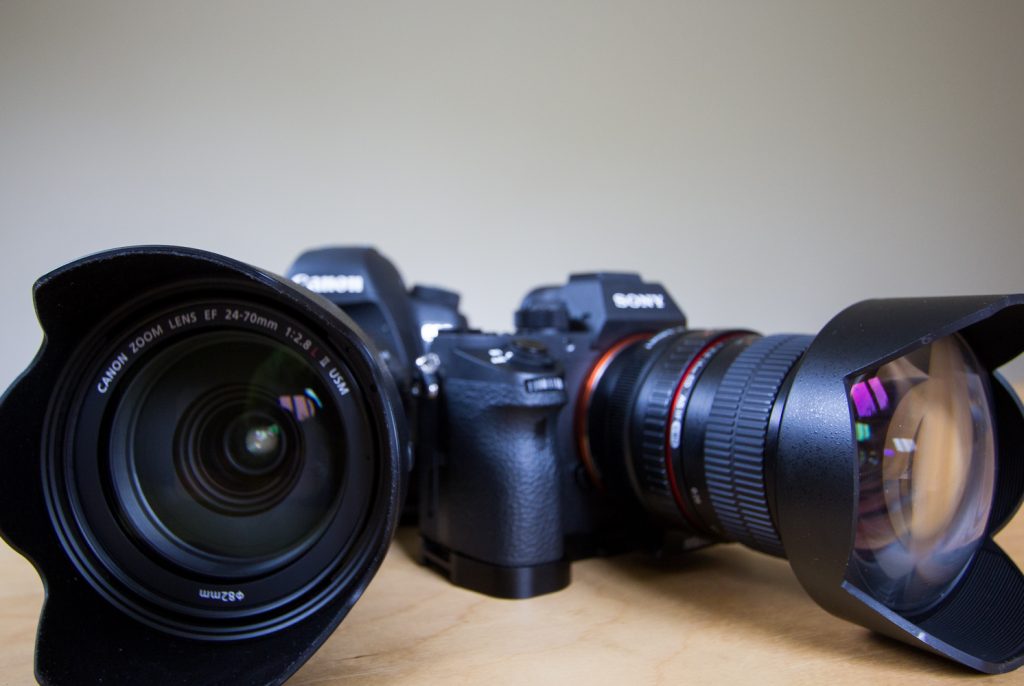 [vc_row css_animation=”” row_type=”row” use_row_as_full_screen_section=”no” type=”full_width” angled_section=”no” text_align=”left” background_image_as_pattern=”without_pattern”][vc_column][vc_column_text]The Canon 6D and Sony A7r II are two of the most popular camera bodies for astrophotography, with the A7s probably giving the A7r a run for its money. I’ve always been interested in how both of these cameras actually perform in low light, and whether they stand up to their reputation as low noise kings.

I’m fortunate enough to own both now, for slightly different reasons. The 6D is what I use for the majority of my astrophotography, as it has the added advantage of it being modded. I bought the Sony A7r II recently to use as my primary landscape camera as I start to venture more into that area of photography.

I wanted to post about a few comparisons between the two bodies for those who are seriously considering these cameras. With both the Canon 6D Mk. II and Sony A7r III now available, this post might become a bit obsolete, but you’ll be able to pick up these two systems for a lot cheaper.

So let’s get stuck in…

In terms of the ergonomics of both cameras, they both feel great to use. The Sony is lighter and smaller, but for people not concerned about size and weight, I suppose this is redundant. Some people do find the Sony a bit fiddly to use and the menu system clunky, but I’ve found getting used to the Sony’s layout has been pretty smooth, and you do get an additional scroll wheel and EV stop dial which is handy. Sony just edges it here.

The Canon has a top illuminated function screen which the Sony doesn’t, which can be really handy at night, although the Sony almost negates the need for this with its single axis flip out LCD – something which becomes very useful when you’re shooting with a camera pointing up a lot (Why every DSLR released in the last 3 years doesn’t have a full axis LCD screen is beyond me, my Canon 60D has one and it’s so useful!).

The Sony has an Electronic Viewfinder (EVF), which to be honest, from an astrophotography perspective isn’t that useful. In low light, the EVF is incredibly noisy in low light and I would argue actually makes star focusing a bit tougher, so it’s far better to focus and frame using the LCD. As a daylight feature though, an EVF is an awesome feature.

The Sony edges a star here as the Canon’s fixed LCD screen does make it difficult at night, and at least with the Sony, you can tilt this 90 degrees – normally enough to save a neck strain.

Here’s one of the big deal breakers: The Sony’s battery life is awful. It’s not so bad that you’ll see the battery percentage number tick down before your eyes, but it’s really not far off. To put it in perspective, on my upcoming trip to the US I’m taking seven (yes, 1, 2, 4, 6, 7) spare batteries with me, and at £30-60 each depending on if you get off-market or Sony brand batteries, this is another cost for the Sony.

Having said this, in practical terms, this isn’t as big a drawback as it first seems. The Sony batteries are very small and don’t take long to charge. It’s really not a hassle packing a few spare ones in a bag when you’re going out to shoot, you just have to remember to keep on top of the charging.

If you’re like me and don’t take hundreds of photos in a session, you’ll get very used to the battery budgeting involved with owning a Sony and will rarely find it a hindrance. Canon clearly wins this area though, they last for days and it’s bewildering why Sony let battery life fall down so hard just so they could make their camera body a bit smaller – They’ve clearly learned their lesson with the new A7r III which has a capacity x 2.2 the life of the r II.

I won’t relate any of my feedback to particular lenses, this is a whole other subject for astrophotography, but the obvious differentiation here is the Sony’s E-Mount compared to the Canon’s EF, and what lenses are available for both.

Sony is starting to catch up in the lens department, and their Zeiss line is very attractive, however, you simply won’t find much which is suitable for Astrophotography with most of the range being limited to ƒ4. For this reason, I use the Metabones IV adapter and stick with an EF lens.

I really rate Canon glass, and especially for the landscape photography I do with the Sony, I wouldn’t go with anything else. The main drawback to the Metabones adapter is its unreliable focus performance in low light, but this is also subject to the Sony’s low light AF (it’s not great..).

From an astrophotography perspective this is pretty irrelevant as we’re focusing manually, and for that, the Sony does just fine. You’ll find you can use all the Rokinon and Sigma astrophotographer’s favourites just fine with the Sony’s e-mount, but I have to edge it to Canon here as I personally believe Canon has the best glass to accompany the camera.

This is a big topic between the two cameras, and because of that, I’ve done some comparisons myself to compare and clean up some of the low light myths surrounding these two cameras. The common misconception is a smaller sensor will always beat a larger one in regard to noise, and this is fairly accurate. However, the Sony’s resolution is much larger than the Canon’s – 42Mp compared to 20Mp. With this much pixel density, noise always looks worse when compared to a smaller sensor. I always find it unfair to compare cameras on noise when they have such different size sensors.

So how does this relate to astrophotography? Well, if you’re concerned about noise in the Sony, downsizing the image can address this perception pretty rapidly, and I’ll demonstrate below. I’ll add before you read on – I’m not big on camera testing, and you certainly shouldn’t take my findings as gospel; above all, I want to demonstrate a couple of examples and give you some food for thought.

These test shots were taken at a black background with the same lens, same settings and in the same room with fixed low lighting, and I’ve used 400×400 pixel crops to demonstrate in each example. The colour difference is purely down to my Canon being modded which bumps the white balance out a bit.

Here we can see a non-scaled example of the Sony vs. Canon, and this is what most people use to compare the two. We can see the Canon just about beats the Sony here, and you can see better in the 200% crop how the pixel density of the Sony exaggerates the appearance of noise.

In this test, I’ve downscaled the image size of the Sony to match the Canon, effectively lowering the resolution of the Sony. Can you see how the noise has seemingly slightly reduced in the 100% image? This, in my opinion, is a far better way to compare noise. In this example, I would say the two images perform about the same with noise, although in the 200% crop we can see the pixel noise in the Sony is a denser due to its inherited resolution. This becomes apparent in the next test…

In this example, I’ve applied the exact same noise reduction to see how the two images respond. Here we can actually see the Sony start to struggle against the Canon, where the background has smoothed out quite nicely. This isn’t surprising due to the difference in pixel resolution between the two cameras, and with larger pixels, it will always be easier to apply smoother noise reduction to the Canon.

So what do these comparisons show? Well, there is no denying that a smaller sensor is going to perform better in low light, and if this is a big consideration for you I’d recommend looking at the Sony A7s II, which has an even smaller resolution than the Canon 6D. Can you write off the Sony A7r II as a contender? I don’t think so, because it still gives great results, and you can help this along by lowering resolution on images where noise is giving you issue.

Having said all this, there is a huge but in the comparisons between these systems when it comes to noise, and it all boils down to an awful decision made by Sony this year. With their firmware update (3.0), Sony introduced a spatial filtering feature, which is essentially a harsh application of noise reduction on exposures longer than 3.2s. For astrophotography, this is a dealbreaker for those who rely on fine detail in their photos.

I actually didn’t learn about this until just after I purchased my Sony A7r II, and after using it for the first time I noticed that it wasn’t picking up nearly as much star detail as I would expect in a sensor with that resolution. After investigating I read up on the issue, and realised my camera body had shipped with the 3.0 firmware update. You won’t see the artefacts in the example images as the filter only kicks in on exposures over 3.2s.

It really does come down to personal perspective whether you’ll notice this issue – many photographers don’t. I would advise reading Lonely Speck’s write up and the updates they’ve provided along the way while Sony try to address it. With the Sony A7r III now available and Sony A7s III coming soon, it’s not clear how much Sony will continue trying to resolve the problems in the A7r II. I wouldn’t put money on them bothering to try and settle it completely unless they tie it with an overarching update to the A7r and A7s systems.

It’s hard to give a winner between these two cameras – not because they’re so close in low light performance, but because frankly, the Sony is in a different league to the 6D due to the fact it’s more than double the cost. Each of these cameras will be relevant to different types of photographer, and here’s why:

If you’re a photographer who just wants a system for night photography, the Canon 6D is the camera for you. The Sony A7s comes close, but with it being affected by the aforementioned spatial filtering alongside the A7r, and the lower resolution which might but some photographers who like to print; the Canon really does tick all the boxes, even if it does have a few feature niggles.

If you’re a photographer who shoots a range of subjects – portrait, landscape and night photography, I would consider the A7R II – the resolution on this camera is beautiful, and with double the pixels of the 6D you’ll be amazed in the detail you get. It does have it’s own frustrations with battery, but as a landscape camera specifically, I can’t fault its performance.

I hope this gives you a better insight into your next camera!

Sony has released a firmware update which starts to address some of the ‘star eater’ issues, but it falls way short of what should be the case. The positives are, Sony is aware of the issues this firmware is causing and are trying to compromise a fix. Whether we’ll see the issue entirely fixed on the Sony a7rII remains to be seen, but I imagine they’ve learned their lesson and the new a7r should be in better shape.[/message][/vc_column][/vc_row]