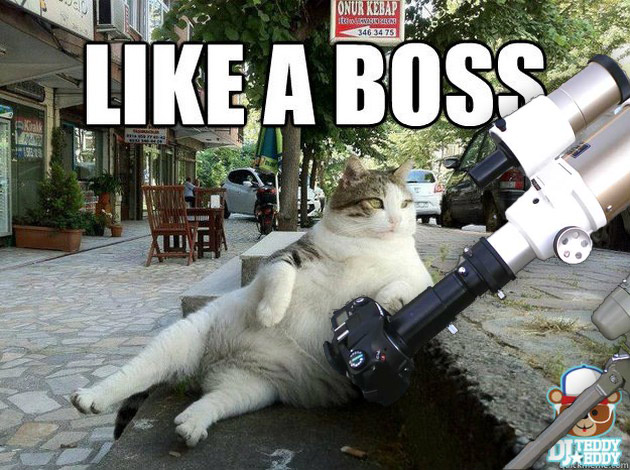 If you just got a telescope, you would have no doubt gazed at the Moon and found a new fondness for it. If you have a camera you’ll no doubt want to take a photo of it. Like me, thousands of people first photograph the Moon when they begin astronomy or astrophotography. It’s understandable, it’s the brightest thing in the night sky, it’s big, easy to find and the perfect beginners target! I’m slowly gaining my veterancy when it comes to photographing it, and am currently working on a large lunar phase canvas which includes all the phases of the lunar cycle. It’s involved me photographing the Moon about once a week for a year, so I’ve learned a thing or three about it. I see a lot of beginners snapping the Moon but not making the most of their efforts, so wanted to write a guide to the best way to get the most out of a shot and have a great looking photo to show for it.

Focus is probably the most important thing to get perfect in any form of astrophotography. The Moon can be a tricky thing for gauging focus and geting it bang on will pay dividends when it comes to processing. A full Moon especially doesn’t show that much detail, so it’s hard to locate some surface texture to get your focus; in which case it’s easier to swing your telescope to a star and use that instead, and the focus will stay consistent when you move back to the Moon. Alternatively, if your camera has Live View, it works well to zoom in x5 or x10 to visually focus on the surface of the Moon. If you don’t have a full Moon, concentrate on the edges where there’s more shadow and more detail to help you achieve focus.

Before you start capturing, set your ISO and have your camera on ‘M’ (Manual). The Moon’s nice and bright so there’s no need to use a high ISO, I tend to use 200-400. If you haven’t got a remote control (I strongly recommend one), set your shutter timer to 2 or 10 seconds, your finger pressing the shutter button will jolt the camera so never try to take a photo without it!

Another thing I see a lot of people get wrong is exposure, the most common mistake is to overexpose the Moon where you lose a lot of detail. The main culprit for this is the fact that the Moon has a lot of contrast on its surface, from the darker Meres to the bright craters which reflect a lot of sunlight. Even if you take a photo which *looks* right, it’s possible you’ve overexposed a crater or five. The best tool to help you here is the white balance meter  On most cameras you should have a movable square section in the Live View screen, or if you haven’t got Live View you can manually move the telescope instead to set the meter in the viewfinder. Move the metered target over Tycho – the huge crater to the lunar South, you can’t miss it. This is the brightest section of the Moon and the best place to set your white balance and exposure. In my experience, It’s better to underexpose the rest of the Moon than overexpose the whole of the Tycho region. Once you’ve adjusted your shutter speed to account for the correct exposure, you’re ready to go!

I normally take about 20 frames and pick the best of the bunch to work from. Some people will merge many frames using software to gain more detail, but for simplicity’s sake, i’m keeping the guide simple.

Bundle your photos on to your computer and pick the best frame of the bunch. I normally zoom right in on a few craters and scroll through until I find the one with the most detail. Because of the atmosphere, each frame will be slightly different, some worse than others. This isn’t yours or your equipment’s fault and there’s really not much you can do about it! With your favourite frame, it’s time to get processing. For this tutorial, I’m going to use Photoshop as an example, and if you’re going to get the most of your photos I’d recommend the same. You can trial Photoshop for 30 days if you’re unsure, and even just license it each month to save you spending a lot of money up front – right now you can get Photoshop and Lightroom for $9 a month! The tools I’ll be using are often available in a lot of other image processing software, so if you’re looking for a free alternative may try Registax.

Open your frame in Photoshop. The first thing we’re going to do is adjust the colour. If you used a filter on your camera when taking the photograph, such as an IR-cut (I’d strongly recommend it); the resulting colour in your frame won’t be quite right. We’re going to use Photoshop’s ‘Auto colour’ option, which will stretch out and align the colours up nicely. Here we see my original frame (left) where I used a Baader Neodymium IR-cut filter, which always puts a blue/purple hue on my images. Then on the right, the result of Photoshop’s ‘Auto colour’. 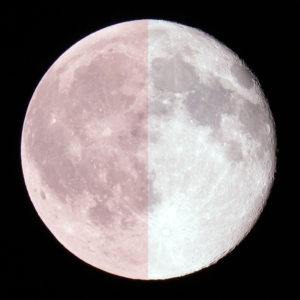 Now we have a roughly set colour to go from, but you’ll probably notice there’s a lot of really bright spots where Photoshop has stretched the colour high. In fact, the Moon as a whole has become super bright! No fear, we’re going to settle that down a bit. Open ‘Levels’ (Image > Adjustments > Levels), and slide the middle point slider to the right, in effect stretching back the white data. You’ll start to see the surface settle down and the detail come back.

You might still feel that some parts of the Moon are a bit overexposed, and from this point, it’s personal preference as to whether you want to reduce it. Again, Tycho can look really dominant here, and we can settle it down using the ‘Shadows & Highlights feature. Head to Image > Adjustments > Shadows/Highlights, and pump up the ‘Highlights’ level 10-20% until you see the brighter points in the image dim. (*Note: ‘Shadows’ is normally set to 30% when you open the option, make sure you revert it back down to 0%!)Now things are starting to look sweet! From this point, you’re hopefully looking at an image you’re fairly satisfied with. These next steps are a personal preference of mine, but with this guide, I’m going to show how I move forward to achieve my Moon shots. Photoshop is your oyster and feel free to tweak, ignore or evolve your own taste.

I like to bring out the dark Mares (lava seas) from here, so we’re going to make a curves tweak. Head to Image > Adjustments > Curves. We want to set points of tone along the diagonal line so to control which parts of it we alter. Hold down ‘Ctrl’ so you see a paint dropper as your cursor, then click on Tycho (or any bright part of the Moon), a medium light part of the surface and then one of the Mares. It’s this last point we want to alter, so select that on the curve with your cursor (The selected curve point is black), and use your arrow keyboard keys to pull it down. You’ll see the curve shift and the Mares start to dim. Don’t go crazy with it, the more you mess with the curve the more unnatural the image will start to appear.

Now for a splash of colour… The vast majority of Moon photos I see are pretty much black and white, and there really isn’t anything wrong with this as technically that’s how it’s captured. The Moon does have a colourful secret, though, and we can easily enhance the various colours on its surface from the varying composition of elements. This is where the term ‘Mineral Moon’ derives. We don’t see these with the naked eye, and they rarely show up in photographs. The Moon actually has an incredibly dull surface, but the intense levels of sunlight reflecting from it give its white shining appearance. Personally, I like to bring the colour out, it gives so much more character to the photograph and adds another dimension. If you want to keep things more greyish, though, skip this step! I won’t take offence and neither will the Moon. If you’re still reading, let’s make a saturation boost – Image > Adjustments > Hue/Saturation. Don’t go crazy here, the more we saturate the moon the more noise we start to introduce, it’s best to add a bit, then if you feel like you can add more later on without destroying your image, do so.

To the keen eye, you might have noticed something after this step. Your colour might look a bit weird? Check out my image above, we can see my Moon has a bit of a red hue to it, and we can validate this in the histogram where the red channel is dominant throughout a lot of the level. Don’t worry about this, boosting saturation always emphasises colour discrepancies from our original Auto colour. How do we fix it? Easy, do another ‘Auto colour’ (Image > Auto colour). You should now see your histogram behave.

Now we’re ready for more magic. Let’s sharpen the final image and crispen up those craters! There is loads of ways to do this, and as you advance in processing you’ll find your own. You can use a high pass, export to Registax to use Wavelets, add filters blah blah, did I lose you? Sorry, let’s just keep it simple, go to Filter > Sharpen > Smart Sharpen. Use the preview box to find a sweet spot. It might be tempting to sharpen like mad, but you really will end up causing more harm than good. Add a little at a time until you’re happy.

By now you should be pretty much done. You may want to adjust brightness and contrast a few notches to get things perfect, and of course crop and resize your final image. I hope by this stage you’ve got something you’re happy with, or at least picked up a few tips along the way

Here’s my final image after following all of these steps. Please do feel free to share your own tips and photos in the comments. Be sure to check out my Lunar Gallery for my photos using the same process. There’s a bunch of other really interesting ways to capture the moon, from HDR exposures and frame stacking to Hydrogen Alpha capture. I’ll aim to do a blog post on those sometime soon! Until then, clear skies… 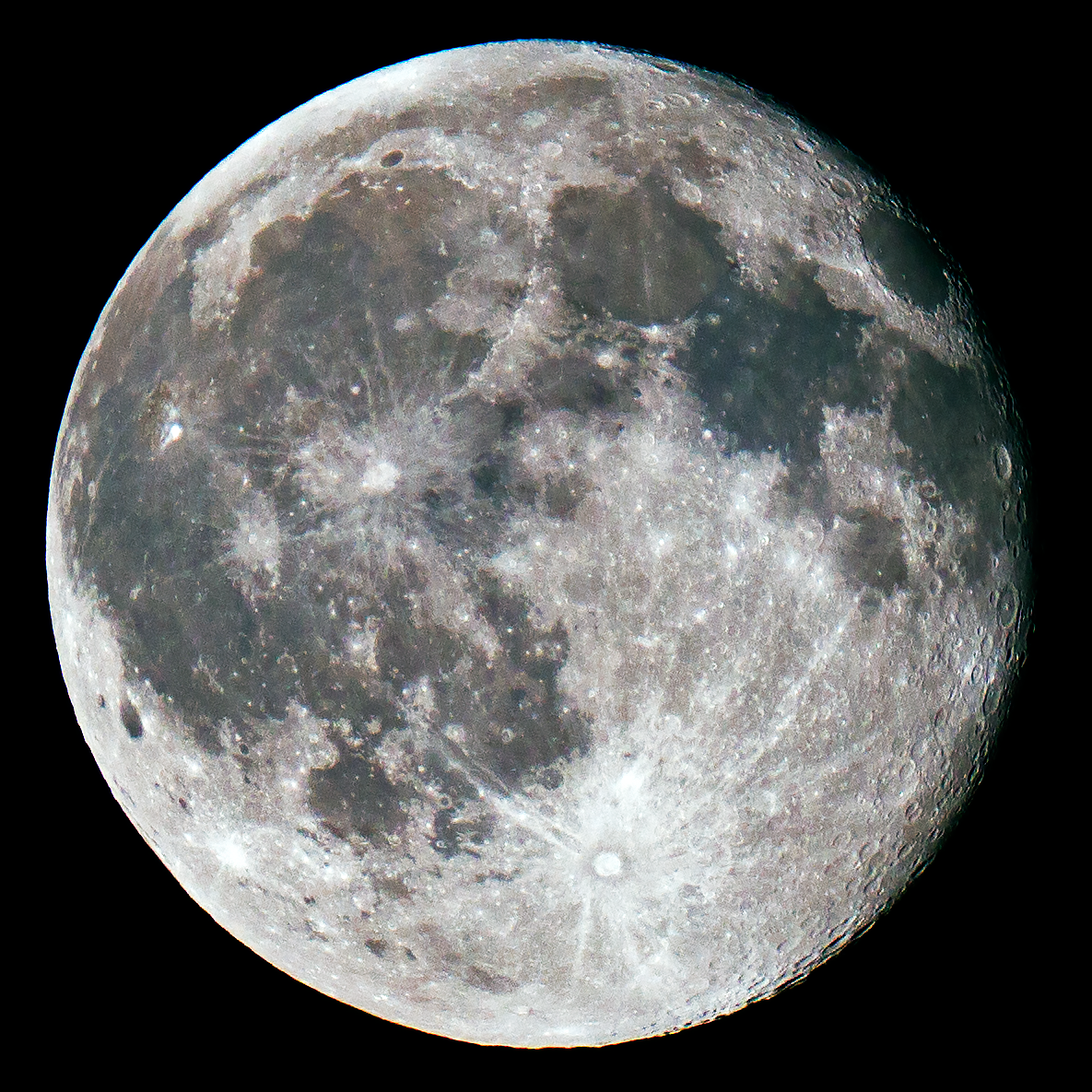